Psychiatric Drugs Are Being Prescribed to Infants [WTF]

Psychiatric Drugs Are Being Prescribed to Infants 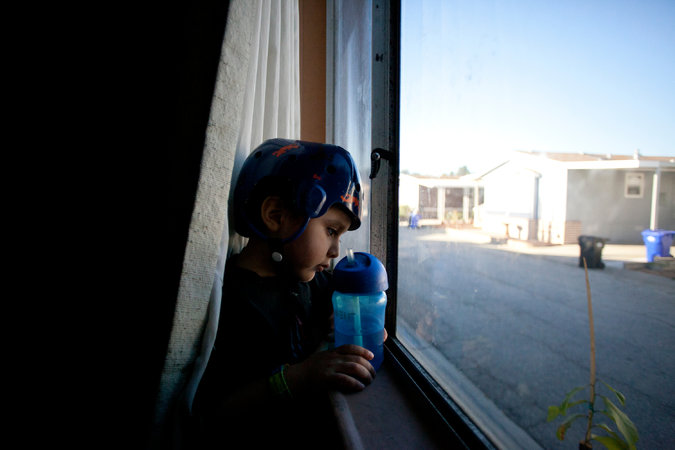 Andrew Rios, 4, took the antipsychotic Risperdal when he was 18 months old to treat severe aggression. Credit Jenna Schoenefeld for The New York Times

Andrew Rios’s seizures began when he was 5 months old and only got worse. At 18 months, when an epilepsy medication resulted in violent behavior, he was prescribed the antipsychotic Risperdal, a drug typically used to treat schizophrenia and bipolar disorder in adults, and rarely used for children as young as 5 years.
From Our Advertisers

When Andrew screamed in his sleep and seemed to interact with people and objects that were not there, his frightened mother researched Risperdal and discovered that the drug was not approved, and had never even been studied, in children anywhere near as young as Andrew.

“It was just ‘Take this, no big deal,’ like they were Tic Tacs,” said Genesis Rios, a mother of five in Rancho Dominguez, Calif. “He was just a baby.”

Cases like that of Andrew Rios, in which children age 2 or younger are prescribed psychiatric medications to address alarmingly violent or withdrawn behavior, are rising rapidly, data shows. Many doctors worry that these drugs, designed for adults and only warily accepted for certain school-age youngsters, are being used to treat children still in cribs despite no published research into their effectiveness and potential health risks for children so young.
Photo
Angela Davis, a speech-language pathologist, working with Andrew at home in Rancho Dominguez, Calif. Credit Jenna Schoenefeld for The New York Times

Almost 20,000 prescriptions for risperidone (commonly known as Risperdal), quetiapine (Seroquel) and other antipsychotic medications were written in 2014 for children 2 and younger, a 50 percent jump from 13,000 just one year before, according to the prescription data company IMS Health. Prescriptions for the antidepressant fluoxetine (Prozac) rose 23 percent in one year for that age group, to about 83,000.

The data did not indicate the condition for which these prescriptions were written. Doctors are generally free to prescribe any medication for any purpose they see fit, so some drugs can occasionally be used in unproven and debatable ways. But the volume and rapid rise in psychotropics such as antipsychotics and antidepressants in children 2 and younger suggest a trend.

In interviews, a dozen experts in child psychiatry and neurology said that they had never heard of a child younger than 3 receiving such medication, and struggled to explain it. They presumed that parents and doctors, probably desperate and well meaning, were trying to alleviate thrashing temper tantrums — the kind that get children kicked out of day care — or an overly depressed disposition, like being strikingly inhibited, nonverbal or lethargic.

“People are doing their very best with the tools available to them,” said Dr. Mary Margaret Gleason, a pediatrician and child psychiatrist at Tulane University School of Medicine. “There’s a sense of desperation with families of children who are suffering, and the tool that most providers have is the prescription pad.”

But Dr. Gleason said that children with ages measured in months had brains whose neurological inner workings were developing too rapidly, and in still unknown ways, to risk using medications that can profoundly influence that growth. She said the medications had never been subject to formal clinical trials in infants and toddlers largely because of those dangers.

“There are not studies,” Dr. Gleason said, “and I’m not pushing for them.”

Dr. Martin Drell, former president of the American Academy of Child and Adolescent Psychiatry, said he was “hard-pressed to figure out what the rationale would be” for the prescriptions. Similarly taken aback, some experts wondered if the medicine was never actually consumed by the child, or if it was issued in the name of a child covered by Medicaid but in fact taken by an ill parent who was uninsured.

“But where there’s smoke, there’s fire,” Dr. Drell said. “For the protection of kids, we should evaluate this. We should identify who these cases are. Maybe it’s not 10,000, but I’ll be unhappy if it’s even in the hundreds.”

Most experts suspected that the trend of medicating younger and younger children for suspected psychiatric disorders was trickling down to very young children. Last year, a report from the Centers for Disease Control and Prevention found that health care providers had given a diagnosis of attention deficit hyperactivity disorder to at least 10,000 children age 2 or 3 and then prescribed medications such as Adderall outside American Academy of Pediatrics guidelines.

“I think you simply cannot make anything close to a diagnosis of these types of disorders in children of that age,” said Dr. Ed Tronick, a professor of developmental and brain sciences at the University of Massachusetts Boston. “There’s this very narrow range of what people think the prototype child should look like. Deviations from that lead them to seek out interventions like these. I think it’s just nuts.”

Prozac is approved by the Food and Drug Administration for depression in children 8 and older and for obsessive compulsive disorder in those age 7 and older. Most antipsychotics, which treat schizophrenia and bipolar disorder, are indicated only for children 10 and older. Risperdal is approved for children as young as 5, but only for irritability associated with autism.

Some other psychiatric medications, such as the antianxiety drugs Valium or Klonopin, are widely accepted to control intractable seizures in the very young. Although their effects on the young brain remain unknown, stopping a child’s seizure warrants their occasional one-time use, said Dr. Amy R. Brooks-Kayal, the head of pediatric neurology at Children’s Hospital Colorado and president of the American Epilepsy Society.

Antidepressants and antipsychotic medications, however, have no established use in young people beyond tempering chronically disruptive behavior, experts maintained, suggesting that the drugs were probably used for that purpose.

Finding specific examples of such children taking the drugs can be difficult, because of family privacy concerns or because the practice remains controversial. IMS Health records but does not release the names of prescribing physicians.

Mrs. Rios said that after Andrew began taking the epilepsy medication felbamate, he became strikingly erratic and aggressive: He pushed his siblings down and destroyed toys. She said that Andrew’s neurologist, at Children’s Hospital of Orange County, Dr. Lily Tran, then prescribed Risperdal, medication that can temper severe mood swings in older children.

Andrew took the medication for four months before his mother decided it was causing harmful side effects — behavior he had never shown before — and took him off it. “Everything became worse,” Mrs. Rios said.

The use of Risperdal for children has been hotly debated among child psychiatrists, with some experts — many financially backed by the pharmaceutical industry — citing positive effects among suffering young people, and others criticizing their use as shortsighted responses to complex problems.

“There are behavioral ways of working with the problems rather than medication,” said Dr. Tronick, who runs a program that teaches health care providers to assist families with troubled children. “What is generating such fear and anger and withdrawal in the child? What is frustrating or causing stress in the parent? These are the things that have to be explored. But that takes time and money.”

Many experts say that the rise in the use of all psychotropics in children of all ages derives from the scarcity of child psychiatrists — only 8,350 practice in the United States, many of them with long waiting lists and higher cost than a family’s established pediatrician. Those pediatricians receive little training in child psychiatry but are then asked to practice it.

« Nicholas Gonzalez, M.D. – Scientifically No Polio Vaccine was Needed
1 In 2 Children Will Have Autism by 2025, Warns Senior MIT Scientist »